If you didn’t know what drillers did for a living and happened to overhear two of them talking shop, you might wonder about the quality of the cheese stacked on their cracker.

They go to work, sometimes traveling halfway around the world to get there, to spend 12 hours a day, everyday, in a doghouse, work with worms and weevils, and handle snakes and spiders. They’ve grabbed a cat’s-ass, picked up gator tails, taken a mouse out of a mouse hole, seen a worm put a mouse in a rat hole, stuffed a rabbit in a joint of pipe, and fished in the middle of a desert where water is as rare as the tooth fairy … and caught a fish!

A rig has a crow’s foot and a crow’s nest but no crow, a pigtail but no pig, and yet, might have a pig with no tail. And a driller can work on a rank

wildcat with a rank worm who smells like Old Spice cologne.

I have a shop full of woodworking tools and only two items, a crowbar and a cat’s paw, got their name because of their resemblance to an animal or bird. Both are used to pull nails or pry. I used to work for my father, an auto mechanic, and I cannot think of one tool named in a like manner. I’ve identified 79 pieces of drilling equipment where a noun—an animal, a bird or a reptile—is used as the adjective to describe the tools appearance, purpose, or ability to perform a task.

Names like Hedgehog brush, snake, rabbit, Piranha mill, monkey board and dog collar speaks volumes about the men who worked the early rigs. Immigrants, migrant farmers, the downtrodden and downhearted Great Depression era men looking for a new life in new industry, called it how they saw it. We still use the terms today.

Mama told me long ago I needed to straighten up or I’d find myself in the doghouse. Smart woman.

The country of Yemen has made the headlines several times of late—coups, wars, and rumors of wars. What started as a civil scrap among countrymen escalated into a regio

nal conflict when Saudi Sunnis began bombing the Yemeni Shiites who are backed by Iran and also Shiites. Arabs fighting Arabs supported by Persians, all of them Muslims. Truth be told, there isn’t much difference between this current dustup and what’s happening in Libya and Syria, or the civil war in Lebanon in the 1980’s, or for that matter the Protestant/Catholic fighting in Ireland. One sect doesn’t like this sect who doesn’t like another sect, all because they all assume to know what God or Allah thinks. Some sore disappointment on the horizon for all of them I’m afraid.

My first trip anywhere was to Yemen, North Yemen at the time. Nothing like experiencing a culture firsthand. Actually, first and second hand, both hands, as in up, held over my head. Amazing how fast they go up when someone points an AK47 at you. A camo-clad Arab patted me down just after I walked off of a flight from London, into the terminal in Sana’a. You would think that’s the one time and place people are unarmed. Everyone in the building had a gun but me. I couldn’t read the Arabic written on the sign outside, but I would not have been surprised to learn it translated to The Terminal Terminal.

The taxi ride to the rig concerned me more than the frisking I’d received the evening before. Like sitting in a rollercoaster without a seatbelt. As the guy herded the old Chevy down an escarpment that looked like Wolf Creek Pass on steroids, he took pride in pointing out the numerous balls of twisted metal rusting away among the rocks and deep crevices. The hulks of cars, heavy trucks and a spattering of buses told a grizzly tale. Where they landed was where they stayed.

The oilfield was close to the ancient city of Ma’rib, right in the middle of the most desolate 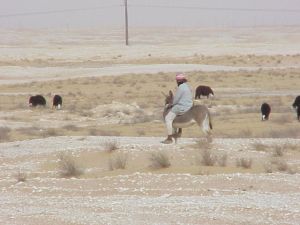 country on the planet. Mountainous sand dunes barren vegetation, animals, and birds, the summer days hot enough to pop corn on the stock. Bunch of malarkey about cold nights in the desert, too. Yes, the temperature dropped 40 degrees, but 140 – 40 is still 100. Find some cool in that and I’ll eat your hat.

Never seen so many flies in my life. You won’t see a fly hit the windshield, but stop the pickup and they’ll cover you up within seconds. It’s like the grains of sand morph into a black, ravenous plague just to torment humans. Eyes, nose, mouth, ears, any source of moisture draws their unrelenting attention. The whole Middle East is fly invested.

When I think of arrowheads, I think of feathers, tomahawks and war paint—the American Indian. To my surprise Yemen is a great source for Stone Age arrowheads. I found many on top of dunes over 1000 feet tall. And I mean there was zero, zilch, nothing but sand for mile after mile. Kick around a bit and poof, an arrowhead. After the wind blew the same dune would yield another point or two as the gusts uncovered them. I often wonder about the men of that time period. What did they hunt and what took them to them a top a dune? Maybe the sea covered where I had stood and men fished with the bow and arrow from a dugout boat. God only knows.

One day a friend and I went looking for arrowheads. We found a few points, but none of them very impressive. I steered the pickup down a dry watercourse called a wadi, toward another area we’d had success at. We talked as men do, consumed in the conversation instead of our surroundings. My friend looked at me and suddenly his eyes bugged out, his mouth flew open and he ducked. I looked left into the muzzle of an AK and barely clamped my mouth shut in time to keep my heart from leaping out the window. The kid holding the weapon in my face rode in another vehicle that matched our speed and wasn’t 2 feet from us. He wasn’t 10 or 11 years old. The little rascal and his 15-year-old brother siphoned the gas out of our pickup at gunpoint.

A queen named Bilqis ruled Yemen back in King Solomon’s day. The area was known as Saba back then. You may know her as the Queen of Sheba. She’s the gal who loaded her camels with gold, frankincense, myrrh and other gifts and toted the lot across the Arabian Peninsula to Jerusalem just to see if the wise King was all he was rumored to be. That’s the Biblical story, according to I Kings, chapter 10. The Koran has another interesting account of their meeting that describes jinns (genies,) hairy legs and devils. I’ll leave my thoughts on the source and subject of the above three where they originate. If the queen could return to her old stomping grounds today, I doubt she would be surprised at what she saw. The only thing that’s changed is their mode of transportation and the weapons they use to kill each other with.

One of these days I’m going to ask God how come there’s no oil in Maui.