If you didn’t know what drillers did for a living and happened to overhear two of them talking shop, you might wonder about the quality of the cheese stacked on their cracker. 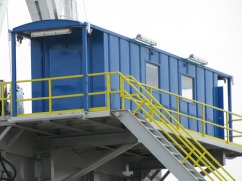 They go to work, sometimes traveling halfway around the world to get there, to spend 12 hours a day, everyday, in a doghouse, work with worms and weevils, and handle snakes and spiders. They’ve grabbed a cat’s-ass, picked up gator tails, taken a mouse out of a mouse hole, seen a worm put a mouse in a rat hole, stuffed a rabbit in a joint of pipe, and fished in the middle of a desert where water is as rare as the tooth fairy … and caught a fish!

A rig has a crow’s foot and a crow’s nest but no crow, a pigtail but no pig, and yet, might have a pig with no tail. And a driller can work on a rank

wildcat with a rank worm who smells like Old Spice cologne.

I have a shop full of woodworking tools and only two items, a crowbar and a cat’s paw, got their name because of their resemblance to an animal or bird. Both are used to pull nails or pry. I used to work for my father, an auto mechanic, and I cannot think of one tool named in a like manner. I’ve identified 79 pieces of drilling equipment where a noun—an animal, a bird or a reptile—is used as the adjective to describe the tools appearance, purpose, or ability to perform a task.

Names like Hedgehog brush, snake, rabbit, Piranha mill, monkey board and dog collar speaks volumes about the men who worked the early rigs. Immigrants, migrant farmers, the downtrodden and downhearted Great Depression era men looking for a new life in new industry, called it how they saw it. We still use the terms today.

Mama told me long ago I needed to straighten up or I’d find myself in the doghouse. Smart woman.