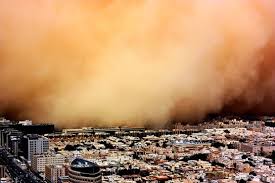 Soon after my wife and I married we drove to west Texas to visit some of my relatives. A typical March day greeted our arrival. Wind at 40, gusts 55 or beyond, temperature 50 but felt like 20 and most of the topsoil was airborne and headed for Oklahoma, so the streetlights were still lit in the middle of the afternoon. Just another day for me, I was raised there. My bride thought otherwise. Before our visit ended, I had to place my right hand over my heart and solemnly swear, cross my fingers, hope to die, that I would never, ever, in a million years, move her to Lubbock, Texas.

Poor girl. She should have said “anywhere the sands blows” because eight short years later, we moved to Saudi Arabia.

I remember the day we arrived, July 8th, 1996, for several reasons. We were in London the day before and the sun shined all day. I’d heard Londoners had seen it before, but I’d been there a hundred times and had not experienced anything other than cold drizzle. And I remember the stares and dirty looks I received all the way from Bahrain, across the causeway, into the magic kingdom … from my wife and three kids.

Okay, I got it. It’s different. A trip into Dammam to the new Burger King for lunch would ease some anxiety. Show ’em western influence existed. We hit the drive-in and I relayed everyone’s order to the invisible lady in the microphone. When I finished, my kids wanted to know what language I spoke. “Um, Texan with a Filipino accent and Texan with an Arab accent when I said ‘same-same’ twice in a row, and three short English words with a Texas accent.” They were impressed.

Maybe not at the time, but looking back, I believe my kids would say they enjoyed that period in their lives. They experienced events and places few westerners can boast. Until recently, Saudi Arabia didn’t allow visitors, the pilgrimage to Mecca aside, but even then pilgrims aren’t allowed to venture out of that particular province.

I mean, what teenage girl can say her dad turned down ten she camels in trade for her. What teenager can say he/she travelled to Egypt to play in a soccer tournament, or played golf in Dubai, Saudi, Qatar, and Bahrain, or saw Brian Adams perform in Bahrain and Sting rock the night in Dubai?

My middle girl asked me if I attended concerts back in my high school days. Sting was her first and she was disappointed by the infrequent visits to the Middle East from the world’s performers. I told her I went to Chicago. She said, “Oh my, who did you see?”

2 thoughts on “Another Day in the Patch”