During a recent visit with a cousin she mentioned how glamorous it must be to fly to so many different countries. I’ve never thought of flying that way. If you watch travel commercials or listen to celebs, you might get that impression.

This old roughneck has traveled all over the world stuffed into the economy section in the back of the plane with the rest of the peasants. Stand in line, wait to get on, wait to get off, numb behind, sore neck, internal clock messed up like a run over lizard, and wondering what planet I just landed on. After 12 hours, all 467 people cooped up in a 747 need a shower. The cabin smells like an outhouse doused in British Sterling cologne.

You might ask, “Why economy?” The simple answer: there’s nothing cheaper.

I walked to the back of a line in Frankfurt one time, and the man in front of me turned and said, “Thank God!”

He said, “I’m not the last one in line anymore.” 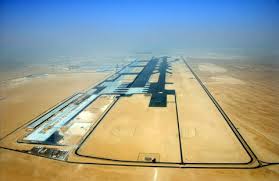 I’ve never sat next to newlyweds who shared honeymoon pictures of their stay in Dhahran, Saudi Arabia.

“Oh, yeah, this is Darla and me next to the rainbow roundabout in Dammam. The picture really doesn’t do it justice. And again here, near the Shula Mall where they behead folks on Friday afternoon after church. We almost got to see one. Oh, look, Darla, remember this picture from the newspaper when you went swimming in a bikini and attracted 10,000 Arab men to the beach? That was a time, I’ll tell ya. We nearly swam to Bahrain before we could get out of the water.”

A driller says, “I have to go to Muscat.”