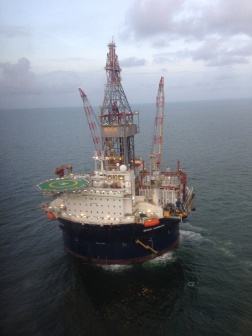 Drilling rigs are an expense to an oil company. They consume money. As they get bigger, to drill deeper, the more they eat. Move offshore and it gets nuts—engineering, permits, rig, boats, helicopters, jet fuel, diesel fuel, wellheads, casing, drilling mud, cement, bits, cement unit, mudlogging, deep sea sub, directional drilling equipment, electric logging equipment, casing tongs and slips, a ton of food a week, all the personnel to run the above, and the list goes on.

The rig I’m on had some great success the past three years. We were slow getting started, but that’s expected when a new-built rig is crewed up for the first time. Growing pains are inevitable. Eventually, this rig became one of the best I’ve ever been associated with. I’m not talking about the iron, the rig itself, but the people. I’ve worked with very capable men and women over the years, but never so many at one time.

Ask any number of people associated with this rig why this particular group of people succeeded and you’ll hear as many different responses. I think it’s because they dismiss every pre-tour meeting with a prayer, asking God for guidance, oversight, and success. That’s 140 men and women petitioning God twice a day.

I utilized the boats and helicopters to keep the men and women out here supplied with the material they needed to do the job. I fed the machine.

It was my pleasure.

6 thoughts on “Feeding the Machine”